Emergency Freight: What Harvey Tells Us About Irma

Less than ten days after Hurricane Harvey, trucks were already moving freight out of Houston, with almost the same volume as before the storm. That doesn’t mean nothing has changed.

Harvey hit Houston on Friday evening, August 25, and hung over the metro area for days, dumping more than 50 inches of rain on Southeastern Texas and Southwestern Louisiana. Floods in the Gulf Coast region tragically cost the lives of at least 60 people. Economically, Harvey inflicted enormous damage on homes and businesses.

Houston is home to a number critical industries, including energy exploration, oil and gas refineries, and related manufacturing of petrochemicals and plastic resins, among others. Houston is also a major freight hub for rail and sea traffic, as well as trucking, including trade with Mexico by land and with South America and other regions by sea. The port has since re-opened, as have some portions of the railroads, but some capacity has yet to be restored. It could take months.

Houston Rates Remain Elevated, Due to Disruption and Pent-Up Demand

Immediately after the rain subsided, trucks began hauling in emergency relief supplies for residents of the storm-affected zone. Inbound rates skyrocketed, as trucks were likely to leave empty, and so were paid the equivalent of roundtrip rates, with additional compensation for detention and layovers.

Outbound freight has picked up by now, and rates have declined in both directions after the initial, post-storm peak. But rates remain elevated in the region due to supply chain disruptions and pent-up demand. Ripple effects from Harvey, and now Irma, extend across the country, and will be felt for months to come.

Irma’s Impact on Truck Freight is Different from Harvey’s

Hurricane Irma’s impact on freight appears to be following the patterns that are more typical of a big weather event, while Harvey was exceptional in many ways.

As of now, Irma is almost finished assaulting the Southeast. It is sunny today in Tampa and Atlanta, with a light breeze. But Irma caused the deaths of at least 11 people in the U.S., and dozens more in the Caribbean. Homes and businesses were destroyed. Millions are still without power in Florida. On a more positive note, relief supplies are being delivered by FEMA and other groups, and cleanup will get underway as conditions allow.

It will take a very long time for freight transportation and logistics to return to normal, after two such monstrous storms in the same month. After Harvey smacked into Houston, some shippers started supplying the South Central region from distribution centers in the Southeast. So Atlanta,  Charlotte, Memphis and other regional hubs were moving freight to Arkansas, Louisiana, Texas, and Oklahoma, because Houston couldn’t do it.

Then Irma headed toward Florida, and those same Southeast hubs re-focused and moved freight south instead of west. Meanwhile, the Midwest had to supply the Northeast, to compensate for all the freight that would ordinarily arrive from Atlanta. And the Midwestern warehouses were also called on to supply Colorado, which is often served by Houston. So it’s not so surprising that rates went a little crazy last week, in between the two megastorms. The pressure intensified even more because it was a short work week following Labor Day.

We’ll see how this plays out, and you can score the accuracy of my predictions. Keep checking the DAT blog and DAT Trendlines for updates, as well as Facebook and Twitter, and let us know how the hurricanes have affected your business.

Stay safe out there!

Saint George Insurance is proud to partner with DAT to offer a special 30 days free on the TruckersEdge Load Board! 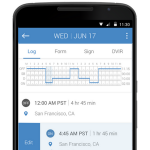