What Does Tesla’s Automated Truck Mean for Truckers?

Elon Musk rolled out Tesla‘s biggest gizmo yet: a fully electric semitruck. The Semi can go a whopping 500 miles between charges, hauling 80,000 pounds along the way. And it can sorta, kinda drive itself—on highways, anyway. The truck comes with Enhanced Autopilot, the second generation of Tesla’s semiautonomous technology, equipped with automatic braking, lane keeping, and lane departure warnings.

“Every truck we sell has Autopilot as standard,” Musk said of the Semi, which goes into production in 2019. “This is a massive increase in safety.”

That may be true—about 4,000 Americans die in truck-related collisions every year, and human error is responsible for many of them. Self-driving trucks will certainly change lives. That goes double for the nearly 3.2 million people currently employed as delivery and heavy truck drivers. But we don’t know how: A dearth of research means that no one really knows what effect automation will have on the sector. It’s clear that truck driving will change, though, and companies testing autonomous trucking today in Florida and California and elsewhere show what that new future might look like.

Trucking jobs are, as a recent report from the Washington, DC, think tank Global Policy Solutions points out, solid, middle class jobs. The median annual wage for delivery and heavy truck drivers is $34,768, 11 percent higher than the country’s median wage. Trucking has also been an opportunity for black, Hispanic, and Native American workers, who have faced serious, race-based barriers to entry in other blue collar jobs and are now overrepresented in the industry. Many trucking jobs are unionized, and the gig doesn’t require an advanced education. You probably won’t get rich doing it, but driving a truck is an option for those—men, in many cases—who might otherwise have done the kind of factory work that’s left the country in the last three decades or so. Losing these jobs outright could devastate them.

Truck driving is, at the same time, a not-so-great job. Driving is solitary, physically inert, and psychologically exhausting. And long-haul truckers can be on the road—and away from family and friends—for months at a time. So people leave. In fact, there aren’t enough truck drivers to go around. The American Trucking Associations reports the annual driver turnover for large truckload carriers reached a whopping 90 percent this year, and it projects a 50,000-driver shortage by the end of 2017.

Meanwhile, the freight shipping industry grows like Elon Musk’s plans for the future. Today, trucks carry 70 percent of all goods shipped in the US, about 10.7 billion tons this year, pulling in $719 billion in revenue. And thanks to a burgeoning economy and population, ATA expects the industry to swell by 3.4 percent annually until 2023. Robo-trucking could help the sector dodge growing pains.

And, better, autonomous driving on highways should be easier to figure out than driving in cities, because those big rigs don’t need to navigate pedestrians, cyclists, and traffic lights. That means most of the country’s first experiences with driverless vehicles may be in the form of 70,000-pound trucks, instead of the kinds of driverless taxi services testing in sections of Pittsburgh and Arizona.

But what does the future look like for truck drivers? That kind of depends on how you define trucking. Because autonomous big rigs aren’t going to be 100 percent autonomous, at least not in the near or medium future.

For example: Peloton Technology, a 6-year-old startup, envisions “platooning” trucks that can travel in packs and “talk” to each other via radio waves. Drivers in these trucks need only sit at the wheel if their vehicle leads the platoon; others can fill out paperwork, nap, or sit at a laptop and manage the fleet’s logistics network (though they’ll probably need more training for that). Autonomous startup Embark sees a future in which drivers are more like tug boat pilots, waiting at a highway’s exit ramp for self-driving trucks to arrive and driving them into “port”—in this case, a distribution center. (The company announced this week it’s using semiautonomous vehicles to ship refrigerators between Texas and California, though today there’s always a safety driver inside to monitor the tech.)

The trucker doesn’t even need to be in the truck: Starsky Robotics—a Silicon Valley startup that employs six full-time truck drivers—would put the driver behind a screen, in a call center-like office. The company, which today is testing and collecting data on Florida highways, envisions one joystick-equipped driver manually guiding trucks through the trickier bits of operations, though construction zones and the last few miles between an interstate and distribution center, while the computer handles the bulk of the simpler, highway driving tasks. One driver might be able to handle up to 30 trucks per eight-hour shift, the company predicts. “These would be remote drivers who get to go home at the end of the day,” says founder Stefan Steltz-Axmacher.

But yes, trucks that drive themselves are going to need fewer people to drive, and Goldman Sachs economists predict all driving industries could lose up to 300,000 jobs a year to automation. Still, those effects won’t kick in for decades. “This technology will be introduced sooner than people think, but take a longer time to diffuse through the country,” says Jonny Morris, who heads up policy for Embark. At first, these vehicles might be constrained to certain parts of the US, maybe those with good weather. (At this point, self-driving sensors do not love snow That could give drivers time to retrain, or retire. (The median age of a truck driver today is 49).

Not surprisingly, the Teamsters are skeptical. “It’s not just job loss,” Sam Loesche, a legislative representative for the Teamsters, told WIRED in September. “It’s also what happens to the working conditions of the person who remains in the cab. How do we protect the livelihood of the driver who may be pushed to operate on a 24-hour continual basis because the company is claiming he’s in the back of a cab?” The union, which represents almost 600,000 truck drivers, is also concerned that that lower demand for actual, human workers could mean lower wages overall.

The trucking jobs that do go away will affect some states more than others. That report from the Washington think-tank Global Policy Solutions notes that states with high shares of trucking industry employees, including North Dakota, Iowa, Wyoming, West Virginia, Mississippi, Arkansas, and Indiana, would be the most vulnerable. But not enough research is being done on the effects of automation on the trucking industry in the first place.

Maya Rockeymoore, who directs Global Policy Solutions and helped write the trucking report, says she’s been surprised by how little thought lawmakers, policymakers, and the automotive industry itself have given to the repercussions of their technology. When she took the report to industry meetings and congressional offices, “it wasn’t clear that any of them had done any modeling or forecasting or research about the impact of their disruptive technologies on the labor market before developing their technology,” she says. “It signals, perhaps, that disruption and the value of disruption itself as being a more important factor than the impact on society.” The first bill regulating self-driving technology is working its way through Congress, but commercial vehicles like trucks aren’t likely to be included in the final legislation. That means states will continue to decide individually how to regulate self-driving trucks on their roads.

Morris, of Embark, says this lack of research is partly out of necessity. “It’s much easier to measure the things that you have now that might go away,” says Morris. “It’s much harder to measure the things that will be created through innovation.” Cars might have killed the buggy whip industry, but they created jobs in the hospitality industry, the oil and gas industry … and trucking. 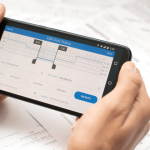